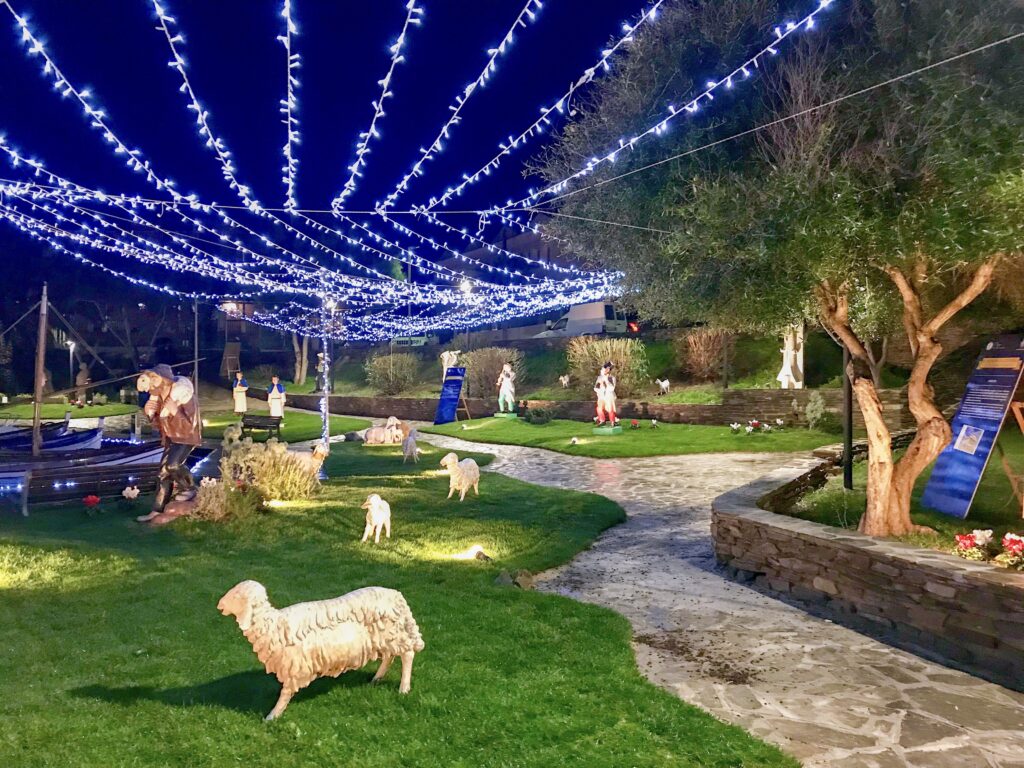 Enjoy the tradition of Italian Christmas and Mediterranean New Year Eve
Holiday season is coming up and Italy is one of the best places to celebrate it.
Perhaps Sardinia is thought of as a summer destination, but it is worth to visit it during winter holidays and this time it is more authentic, more real, and more traditional. Is so nice to find your Mediterranean escape in Sardinia in our delicious winter tour. After all, these are traditional dishes of winter, which you can try only during this period and enjoy the local gastronomy and find out what world famous Sardinian centenarians eat.

Diverse sides of Sardinia’s life through taste and flavors, wine and food, culture and traditions, wonderful local people and the pure atmosphere of island life. Each day is dedicated to a specific area with its history and cuisine, which varies from place to place. Each day will be full of emotions, new sensations, wonderful sites, genuine food and exquisite wine!

Admire the magic of the Sardinian Christmas

Enjoy the Italian tradition of Christmas cribs and charming holiday decorations of local villages. A tiny fisherman village Stintino with its small marina and typical boats is amazingly decorated with Biblical scenes and sounds of relaxing music.

WHY IT IS WORTH VISITING SARDINIA FOR WINTER HOLIDAYS

One of the most delicious winter travels in the Mediterranean

“In Sardigna” – “Life in Sardinia” tour, cheese-making and traditional dinner in Sardinian village.
An unforgettable journey into the traditional life of Sardinia, culture and cuisine of the island in a typical Sardinian village. This is a special day that you can not miss while you are on the island. Agriturismo – traditional farm, reveals the essence of the mood in Sardinia, where the owners keep the traditions of the island. All products from the farm are homemade, cooked according to the old traditions and are the basis of the Sardinian cuisine – different varieties of sheep’s cheese, sausages, typical home-made pasta, bread, meat, sweets, wine and liqueurs. It’s a real familiarity with the culture, traditions and typical cuisine of the island, which can be discovered here. The culmination of the traditional Sardinian cuisine – the famous “porchetto arosto” (or «porceddu» in Sardinian language) – suckling pig roasted on a spit for several hours in a special way how it was cooked by Sardinian shepherds for centuries or goat meat cooked in a traditional way. It offers a variety of unique traditional dishes and wines.

Old town of Alghero
The town was founded in the 12th century the powerful Doria family of Genoa, who ruled it for centuries, then was captured by the Aragonese and further developed under their influence. Under the crown of Aragon, Alghero has reached its peak as a fortress: the deep bond of the past is still evident in the local dialect, and the Aragonese style of the ancient city appears constantly in the old city walls, churches, houses and roads. The old town can be called a true treasure of history, culture and archeological sites. Alghero was and is a city of charm, ideal for those who love the typical features of the past of old Europe under the strong influence of the Aragonese domination. Currently, it is one of the most famous, the pleasant and relaxing, romantic landscapes, as well as shops, supermarkets and restaurants.

Typical family winery, food and wine tasting.
Visit the local winery with vineyards by the sea surrounded by Mediterranean nature and flavors, here they produce premium wines, characteristic only for this territory, unique for the island. The story about the ancient wine traditions and typical wines of the island. Gourmet tasting with wine, food, olive oil and typical bread.

According to recent studies, Sardinia can be attributed to the country with the oldest traditions of wine making, since there were discovered the amphorae with traces of wine during the last archaeological excavations in the zones of ancient necropolises dated about 3-5 thousands years old. The island is famous for the biggest number of grape varieties, which, in addition to the traditional ones, also has grapes typical only for Sardinia, like the red ancient grape “bovale” in the south of the island, white “vernaccia” from Oristano, and an amazing red-ruby “cagnulari” that grows only in the Sassari area in the northwest, and was called by one of the most important wine experts Robert Parker “the wine of the next 20 years”. Besides that, Sardinia is famous in all the world for its special red “cannonau” typical in all the island, it contains the highest amount of polyphenols, which preserve youth.
Each of the island’s territories has its characteristics and typical grapes and wine production. Therefore, here it can be tried a huge number of different types depending on the zone of origin and soil. The wines of Sardinia in recent years attract special attention of experts and conquer the world.
For our exclusive wine routes we choose small local family wineries where traditions are passed down from generation to generation, and art and soul are expressed in wine, what makes it unique. Each wine is a reflection of the flavors of the territory where the grapes grow.

Tour around Riviera del Corallo or hiking in Porto Conte Regional Park.
An exciting journey along one of the most beautiful Mediterranean coasts – famous Coral Riviera, so called because of the presence of rare corals of the extraordinary beauty, and famous Alghero jewelry. The marine park of Porto Conte, the highest point of the promontory of Capo Caccia (Hunter Cape), the magnificent Neptune’s Grotto by the famous stairs Cabirol consisting of 656 steps, along with the huge rocks. These caves are 2 million years old and they are one of the largest in Europe. The regional park of Porto Conte, the Geo-Mineralogical-Environmental Park of Sardinia, the reserve of Mount Minerva, the reserve of Capo Marargiu, Motresta crest, are just some of the places where you can learn another way to travel: a slow walk, more or less challenging, to discover the beauty of an area, its history and its most hidden aspects. We will guide you along little-known trails, reaching the starting point by jeep. Hike is depending on the weather conditions.

Nuraghe Santu Antine of Torralba, prenuragic necropolis of Sant’Andrea Priu.
Sardinia is the most ancient civilization in the Mediterranean. A unique tour to the ancient monuments, Nuragic complex, approx. 3900 years, which is an important example of prehistoric architecture of the Mediterranean.
Nuraghe (huge conical stone towers), the sacred wells, the Tomb of the Giants, and Meniere’s – show the ancient culture, which existed in Sardinia 5-7 thousand years ago. The towers are built of huge stones without cords with knowledge of mathematics and architecture and are still a mystery of prehistoric civilization. With 18 rooms one of its hypogeal tombs is among the largest in the Mediterranean. The prenuragic necropolis of Sant’Andrea Priu stands on a plain less than ten kilometers from Bonorva (the town famous for the typical bread “pane zicchi di Bonorva” DOC) and 500 meters from the rural church of Santa Lucia. The funeral complex is composed of twenty “Domus de Janas” dating back to the neo-Eneolithic (IV-III millennium BC), excavated on the wall and on the plateau of a trachytic outcrop 10 meters high and 180 meters long. Inside they are reproduced architectural living details to recreate environments similar to the home of the deceased. The necropolis was reused for a long time. In Roman and then Byzantine times the ‘tomb of the Cape’ was transformed into a rock church, one of the first in time of persecution. Several times plastered and frescoed with scenes from the New Testament, which you will notice inside, it was named Sant’Andrea, as the name of the site.

Lunch “Taste and flavors of the ancient land” in the typical “panefratteria”.
Original cuisine according to the ancient recipes of the island made only with bread. Sardinia is the richest region in the world for the varieties of bread, you will discover what means “panefratteria” and unique dishes from bread which the local people in inland villages used to cook since ancient times. Amazing dishes from different types of Sardinian bread: appetizers, first courses and even desserts!

A trip through the territory of Anglona famous for its green hills, olive groves, pastures and small typical villages.
Old town of Sassari. The northern capital of Sardinia is the ancient city of Sassari, with an old university, theaters, a center of culture and tradition, a bright mixture of which was introduced in the past by people from northern Italy. Excursion to the historical center of Sassari with a visit to the famous historical shop of tpical local food. The main square of Piazza Italia with the Palazzo del Provinca Palace, the beautiful main cathedral of San Nicola, the Piazza Castello, where the remains of the Aragonese castle are found, the magnificent Duomo cathedral dedicated to the patron saint of the city San Nichola, the old city center with its numerous streets and typical buildings. The most famous traditional parades of the island are held in Sassari, and the ancient Candelieri parade on August 14
is recognized as a UNESCO heritage site. Sassari is one of the three towns with the best climate in the world.

Traditional local aperitif.
The culture of aperitif is very typical in Italy and in Sassari it has a special sense. The aperitif time in the local bars starts after 11:00 am before lunch and after 5:00 pm before dinner. We invite you for local aperitif tasting in one of famous bars.

Dinner with “Fainè” tasting is Sassari-style in typical taverna – even though this dish comes originally from Genoa and it was the Genoese who settled in the northern capital of the island, brought it here, but this simple and delicious dish in the form of big thick flat chickpea flour cakes with the addition of various stuffing, became a characteristic in Sassari. This dish is cooked only in the cold season in traditional taverns of the old city in a wooden stove.

Castelsardo – Sardinian Castle
Driving along the breathtaking coast through the northern panorama, we are approaching the delightful medieval town of Castelsardo of the 12th century, which stands on a promontory in the center of the Asinara Gulf. The time is stopped here, its small old streets climb from the hill to the top, where stands the ancient castle of Doria, blowing us in the past centuries. Beautiful, breathtaking landscape from the top of the chapel on the sea around the island of Asinara and Corsica. Castelsardo is famous for traditional Sardinian handicraft and typical hand-made local baskets. Visit Roccia dell’Elefante (Elephant Rock) – the famous rock in the natural form of an elephant and a prehistoric burial «domus de janas» of prenuragic period, approx. 5000 years.

Sardinian sea-food experience in the famous local restaurant
Sardinian seafood cuisine is one of the best and delicious in the Mediterranean, the true paradise for seafood lovers, its beautiful crystal-clear sea offers the variety of delicious fresh fish and local seafood.
Tasting special menu with the unique dishes of the local seafood cuisine by a famous chef. Aperitif on arrival for our guests with the famous local Spumante Brut of the territory and appetizers; variety of special starters based on the seasonal products, vegetables, fish and seafood of the territory accompanied by the best Sardinian wines, local sweets and liquors of the territory.

Culinary hits of the winter season and traditional dishes of Sardinia